“Who’s the baddest witch in town?”

This witch is not suitable for children.

For our third entry, I’m going to skip to the most recent witch I’ve encountered: the fearsome Fiona Goode. This delightful sorceress is the main antagonist / protagonist of American Horror Story: Coven, the third season of Ryan Murphy and Brad Falchuk’s anthology horror television series. 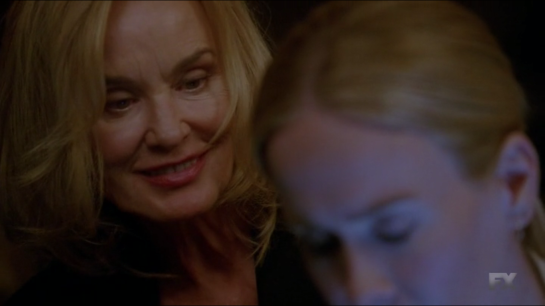 In the world of AHS, witches operate in covens; the show’s titular coven is run out of a boarding house in New Orleans, Louisiana. The show teaches us that once every generation, one particularly powerful witch is ordained as the Supreme; this witch can perform magic which is varied and grand, and has an implied responsibility to lead the coven towards greatness. At the outset of the season, Fiona Goode has held the position of Supreme for over 40 years.

But Fiona has not been a good Supreme. Despite possessing great magical prowess and a delightfully wicked wit, Fiona has used her powers to grant herself a life of luxury, forsaking the needs of the coven to pursue her own selfish desires. As age catches up with her, these desires are focussed into a single goal: finding a means to recapture her squandered youth. How can she do this? By locating and killing the next Supreme, preventing her power from being sucked away entirely by the ascending witch. 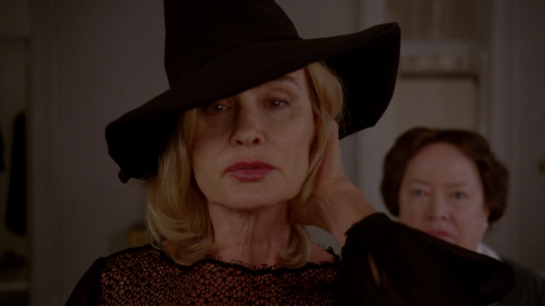 As a viewer, I loved Fiona. Her wit always cut just as fiercely as her spells, and her insistence on dressing in black was a pleasing nod to witchy tradition – she even wears a pointed hat on Halloween! She is a 21st century witch done right, a heady mix of magic and modernity, played to perfection by the indomitable Jessica Lange. Fiona’s pursuit of eternal youth makes her a relatable protagonist, just as her betrayal of the young coven makes her a barbaric antagonist. It really is an enjoyable arc.

It’s disappointing, then, that the show unravels so completely in its final episodes. Early on, I began to suspect that the writers’ motto for the show must have been “what’s the most entertaining thing that could possibly happen next?” – a philosophy which did hook me for the first half of the season, however ridiculous those twists and turns may have been. But in the second half of the season, it becomes apparent that far too many secondary plot threads have been introduced. Fiona’s quest for youth is buried beneath conflicts with misogynistic witch hunters and puritan neighbours; the show’s preoccupation with racial hate crimes further muddles the season arc. Fiona is absent for most of the final episode, which does both the show and the character a huge disservice. As the major villain of the piece, the Supreme deserved a more memorable farewell.

Fiona may have been the standout, but I liked all the other Coven witches too. Teen witch Zoe (Taissa Farmiga) was great as a new coven member suffering from a macabre curse. Emma Roberts was delightfully snarky in the role of Madison Montgomery, a young celebrity witch who seems destined to follow in Fiona’s errant footsteps. Nan (Jamie Brewer) made me laugh a lot with her psychic commentaries, and Queenie’s (Gabourney Sidibe) ability to turn herself into a human voodoo doll was possibly the wickedest power of all.

Swamp witch Misty Day (Lily Rabe) was good too, although her power of “resurgence” – the ability to bring dead things back to life – made things a bit boring later on. Here’s a spoiler: by my tally, there are sixteen major characters in the show, and fourteen of them die at some point in the season. Some of them even die twice! It’s pretty hard to create any narrative tension in a world where death isn’t a real consequence.

Still! Critique of the show aside, I enjoyed AHS for its smart portrayal of so many stylish, modern witches. Plus, the first episode of the season is called “Bitchcraft”. Can witches get any cooler than that?

— This is the only season of American Horror Story that I’ve watched; the seasons can be watched in any order, so obviously I started with my favourite setting! I’ve read elsewhere that Asylum is the best season, and I’m also intrigued by Murder House and Roanoke. The writing of Coven may have disappointed me in the end, but I suspect I’ll give AHS another chance sometime in the future.

— Jessica Lange is one of only 23 people to have won the “Triple Crown of Acting,” a feat achieved by winning an Academy Award, an Emmy Award, and a Tony Award. One of her two Emmy Awards was for her portrayal of the Supreme witch.

— Coven plays with a lot of racial imagery throughout the season; most of this imagery involves white people doing horrible things to black people. Like, really horrible things. To begin with, it looked as if the character of Delphine LaLaurie (Kathy Bates) was being set up for a redemptive arc, as the friendship she forms with Queenie (a black witch) seems to make her regret the appalling crimes she once committed against her slaves. But then the arc ultimately comes to nothing, which made all the racial torture seem like it was just horror for horror’s sake. A bit unpleasant.

— I loved the Axeman though. Did you know he was a real serial killer?

— I know two contradictory things about witches: that they live alone in the woods, and that they work together in covens. I like both of these ideas, but it’s hard to reconcile them into a cohesive whole within my own magical universe. Witches don’t appear in my first book, though, so I’ve still got a bit of time to work this out.

— It was really hard to choose a pull quote for this post, because everything Fiona says is eminently quotable. I’ll finish off here with one more of the best:

“In this whole wide wicked world, the only thing you have to be afraid of … is me.”

This is the personal blog of JACK HENSELEIT, author of middle-grade horror series The Witching Hours. My first six children's novels (The Vampire Knife, The Troll Heart, The Genie Rings, The Mermaid Wreck, The Dragon Crown, and The Giant Key) are available in Australia now!